Kim, the author and creator, has an ingenious way of portraying all of this in comic strip form; erotically tinted subjects depicted in his sublime style of drawing, with here and there hints of an absurd surrealist humour.

This is certainly not Kim’s test piece, because besides Esther Verkest he has been drawing daily cartoons for the newspaper De Morgen since the year 2000 and he has also been published in Knack, Humo, Het Belang van Limburg, Fluide Glacial, Zone 3500, Eppo and Stripgids.

In 2007, Kim’s oeuvre was awarded the Bronze Adhemar at the Turnhout Comic Strip Festival.

Kim’s humour is of the surrealist type. The type of humour that Belgium understands so well and that apparently seems to come up against an invisible wall at our national borders. Decor and Witz are virtually timeless, because they are hardly ever bound to current affairs or to any particular topic. It’s as if an author can also give his oeuvre a timeless dimension by largely leaving behind the rational. So, the difference between Kim’s current work and his earlier jokes is primarily stylistic in nature. After ten years, Esther Verkest, his fantasy character, has grown into an advertising board for P-magazine, the Flemish babe magazine. From the start, she has managed to capture the hearts and so much else besides of her macho audience. Esther is both romantic and dominant, unattainable by real guys but available to losers. However, she is not a character to be ignored, but a protagonist with real personality and an ideal image for the reader. The latter has no issue with the typical mix of sex and absurd humour. As long as Kim keeps to his part of the contract, which is to be funny! It doesn’t matter if he conjures up weird characters, such as Remi Sans Famille. Or even the infamous blooper machine; they are the perfect result of the bizarre workings of Kim’s mind and imagination.

Over the past 10 years, and armed with his completely twisted sense of humour, Kim has projected an image as being one of the stalwarts of the publishing house Oogachtend. A constant presence in the Flemish comic strip landscape, who has certainly earned his place. 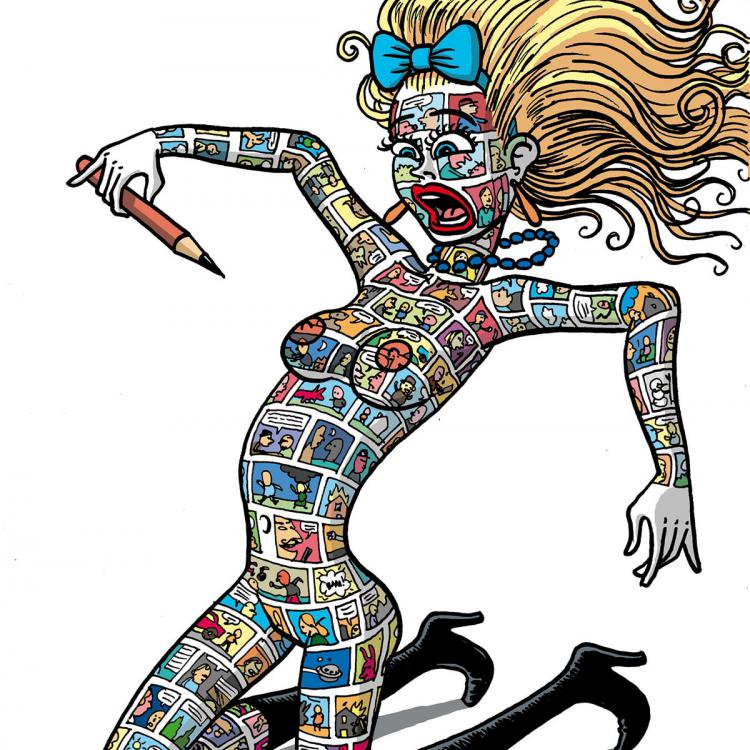